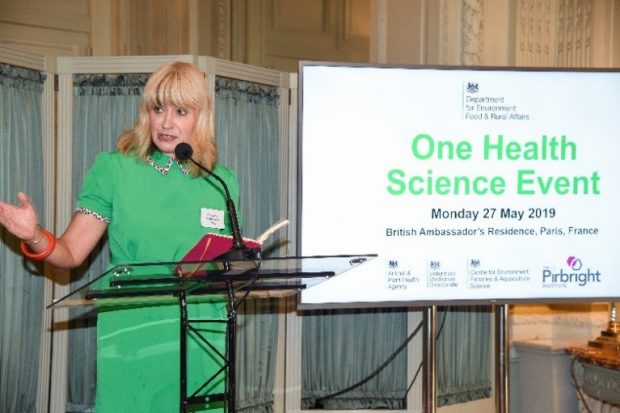 Welcome to part 2 of my reflections on my activities as UK CVO over the latest 6 months.  This instalment has an international flavour covering aspects that have required me to adopt multinational gestures of courtesy and to keep my passport where I can find it.

In June, the UK and China signed a landmark agreement worth an estimated £230 million for UK beef producers over the next five years. This hard-won UK-China Beef Protocol was the prize at the end of an inward Inspection Visit in early June by senior officials of the General Administration of Customs of China (GACC).   The delegation visited cold stores, slaughterhouses and official control labs across the UK, to audit and inspect the UK’s food safety and official controls for UK beef and to agree an Export Health Certificate (EHC) for UK beef exports to China. Following this visit, work carries on to enable China to complete approvals and listing of the inspected UK plants prior to exports commencing.

These encouraging results mean that British beef could be served on Chinese dinner plates by the end of the year, and comes more than 20 years after the Chinese government imposed a ban on UK imports of beef. 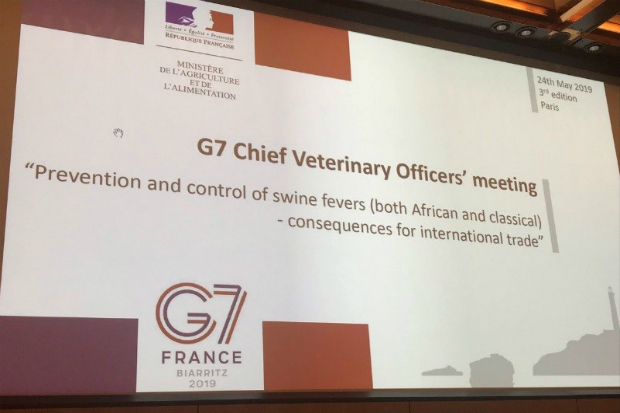 Building on commitments on transboundary animal diseases (TADs), shared during previous G7 CVOs meetings in Japan and Italy, I joined fellow G7 Chief Veterinary Officers (CVOs) in Paris in May for this formal ‘meeting of minds’. It was an opportunity to share knowledge and experience in the prevention and control of swine fevers and we discussed a common approach to limiting the consequences of African Swine Fever (ASF) and Classical Swine Fever (CSF) on global trade.

In our formal conclusions, we stressed the importance of animal disease zoning, enshrined in the OIE Code and the World Trade Organisation (WTO) Sanitary and Phytosanitary (SPS) Agreement. An exporting country affected by ASF or CSF should be able to continue to export from zones deemed as disease-free, provided all the SPS guarantees required by the importing country are met.  We also formally recognised the provision given by the OIE Code for a country to be recognized as free of ASF or CSF in the domestic pig population while having cases in wildlife.

Given the continued threat to UK pigs from ASF at our borders, this was a reassuring sharing of evidence-based disease control strategies.

Engagement in support of future UK global trade deals took me to the ‘One Health’ Science Event at the British Ambassador’s Residence in Paris.  The event coincided with an evening break from the 87th OIE General Session in Paris at the end of May.  During the evening, we highlighted the need for strategic science collaboration to combat disease and antimicrobial resistance, showcasing the UK ‘One Health’ Science offer around animal health and welfare at the APHA internationally recognised laboratories and the government science agencies: APHA, VMD, Cefas and the Pirbright Institute.

The OIE General Session itself is a forum where chief veterinary officers, directors of agriculture and animal health, and other international veterinary and scientific experts, examine and agree intergovernmental standards covering animal disease control, including zoonoses, the safety of international trade in animals and products of animal origin (POAO), and animal welfare.  It is of key importance for the UK to engage and participate in this discussion and to take the opportunity to engage with fellow animal health and welfare guardians and current and future trading partners.

In Paris, the UK and ROI were also invited to participate in a ‘miniQuads’ networking meeting in Paris.  The Animal Health Quadrilateral Group (Quads) of CVOs (Canada, US, NZ, Australia) meet to discuss opportunities to work together to mitigate risks to animal health.  This was an opportunity for all to meet face to face and to investigate common positions on animal health a welfare, leading to the sharing of knowledge and successful initiatives.

This larger group makes up the International Animal Health Emergency Reserve (IAHER), which can be invoked in support of an international disease outbreak and is a fine example of international solidarity and transparency.

AMR and the International ‘One Health’ approach

Antimicrobial Resistance (AMR) continues to be high on the agenda, following the publication of the UK’s 20-year Vision for AMR and 5-year National Action Plan (NAP) in January. On behalf of ministers, I the AMR Ministerial conference in Bucharest (under the Romanian EU Presidency) in March and the 2nd International Ministerial Conference on AMR in the Netherlands in June, in the company of Baroness Nicola Blackwood, PUS for the Department of Health & Social Care (DHSC).  So… how have we been doing over the past year?

In January this year we also published the UK One Health Report on antibiotic use and resistance, a joint project between the Veterinary Medicines Directorate (VMD) and others in the Defra Group, Public Health England, Food Standards Agency (FSA) and colleagues from Devolved Administrations. This brought together UK data from different sectors and surveillance programmes, giving an overview of data in the context of ‘One Health’.  Publication of data on antibiotic use and resistance is very important. It allows us to explore why approaches have worked, as well as identifying where progress is harder to come by and how we can address this constructively.

Prescribing pressures on vets and doctors are different and the two sets of data can’t be directly compared. But many of the animals under our care are livestock, and livestock should be a population of healthy animals. So I am proud to be CVO in a country where prescribing in animals is lower than it is in people – that’s the way it should be.

I was able to share in and celebrate successes at the Antibiotic Guardian Awards Ceremony at the end of June, recognising excellence across ‘One Health’ in the field of AMR.  On the animal health side, the nominees had been working to find the best ways of rearing animals using minimal quantities of antibiotics, focusing on farm, herd and health management. The fact that this was the 5th year of the antibiotic guardian initiative and there was such a strong field of nominees for awards was a real credit to all those nominated.

There are areas of my work that overlap into the scientific realm, where I am able to team up with APHA Director of Scientific Services, Kath Webster, and the ‘One Health’ approach to AMR has led to good links with the outgoing Chief Medical Officer, Dame Sally Davies.  It is always a delight to meet fellow female CVOs from around the world and it was a joy to spend time at the OIE General Session with Joyce Dontwi, Ghana CVO.  I am proud to be a part of this growing network, supporting each other and their teams both within the UK and internationally.