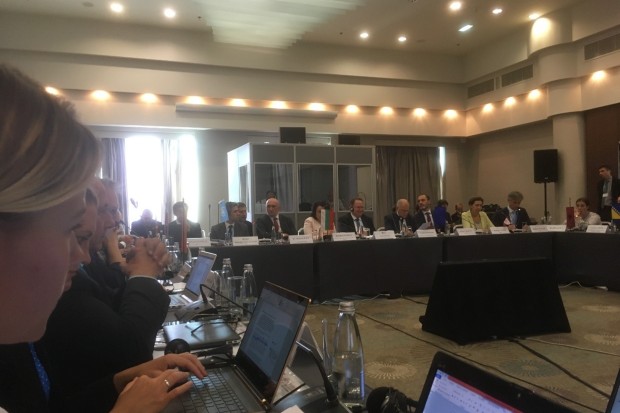 In my role as a Field Epidemiology Veterinary Advisor within the Animal and Plant Health Agency (APHA), I’ve found myself in meetings across Europe learning how other countries have dealt with African swine fever (ASF) incursions. I attended meetings of the Global Framework for Transboundary Animal Diseases (GF-TADs) Standing Group of Experts on ASF in Prague, Czech Republic and Sofia, Bulgaria during 2019; GF-TADs is a joint initiative of the Food and Agriculture Organisation (FAO) and World Organisation for Animal Health (OIE). Obviously this was pre-Covid when actual meetings were still in progress.

I was attending as an observer on behalf of the UK, while affected countries sent delegates who gave updates on the disease situation in their country. Back in the UK, I provided feedback briefings to colleagues involved in disease outbreak contingency planning in both DEFRA and APHA.

The meetings themselves are arranged in a U shape with countries seated in alphabetical order. Most delegates speak in English, but we had Russian interpreters available by earphones. All the presentations are available on the GT-TAD's website. 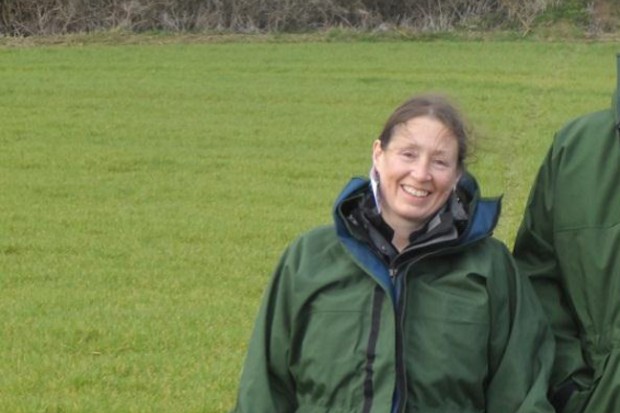 I learnt a huge amount about the disease and especially how different competent authorities approached control measures in their own countries and the relative successes. It is particularly valuable for us to have these real life case studies from which to learn both policy and operational lessons.

The approaches vary depending on the types of farming and the level of organisation within each state veterinary department. The most recent meeting in May 2020 was held online. Although this format is bio secure, it doesn’t have the advantage of being able to speak to other delegates informally and even spend a few free hours sightseeing!

These experiences and opportunities allowed to me reflect on how I had reached my current position within the organisation. I started off over 25 years ago as a Temporary Veterinary Inspector, employed a few days a week to TB test and investigate and deal with BSE cases.

Subsequently, I was taken on as a Veterinary Officer and quite a few exotic disease outbreaks later (classical swine fever 2000, Foot and Mouth Disease in 2001 and 2007, bluetongue 2007, numerous avian influenzas and equine infectious anaemia 2014) I find myself as a field epidemiologist working in the South West of England. This inevitably means that my “day job” revolves around bovine TB, where I’m often involved in offering advice over especially difficult cases and interpreting statistics for colleagues.

I have to admit that I quite like the balance of more “routine” TB work with newer more “exotic” work related to ASF. It keeps me on my toes! However, this wouldn’t have been possible without the many years of investigating first TB and then other diseases on the ground. The same principles of disease investigation are required for both TB and exotic diseases.

I think it’s always important to be aware of what is happening on farms when analysing outbreak data. It helps you understand the farming system and the validity of the information that you are dealing with, and this is where the real value of field epidemiology lies. 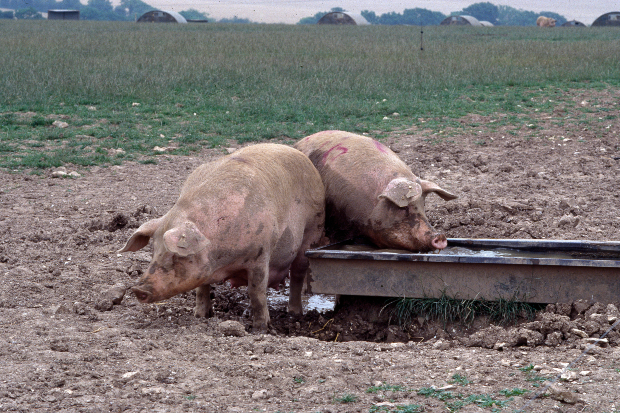 The Field Epidemiology Team cover the whole of Great Britain. I have colleagues working in Scotland, Wales, Northern and Southern England and the Midlands. Together with our team leader and manager we form a tight-knit group, despite our wide geographical distribution. If an outbreak of exotic notifiable disease occurs, we spring into action and organise investigation visits and subsequent tracings to any contact premises.

Communication becomes all important and the information gathered is reported directly to the Chief Veterinary Officer and policy colleagues, as well APHA operational colleagues to aid their decision making.

I asked at the start of this article about “How to cope with ASF?” I think our response would very much depend on how quickly we detected the incursion. Experience in Europe and elsewhere has shown that it can take a few weeks to become apparent in large pig units, and if feral wild boar were infected it could be a few months.

To enable prompt detection, APHA have worked with industry representatives to raise the profile of the disease and highlight the risks. Here is an example of some of the many posters available: 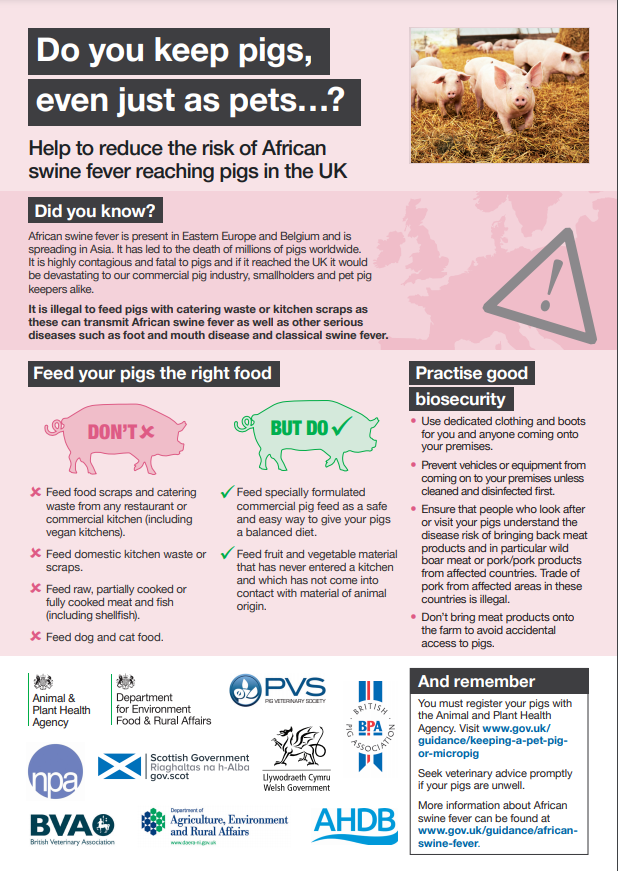 In addition, a pilot scheme has been launched in the Forest of Dean area in Gloucestershire to sample found dead wild boar. If this is successful, there are plans to roll it out across GB. Because the disease has an almost 100% fatality rate amongst naïve wild boar populations, sampling found dead carcases has the greatest likelihood of detecting a positive case.

I have confidence that we would rise to the challenge of any ASF incursion, and act quickly and decisively to cull out and disinfect infected pig herds and eliminate disease in any affected feral wild boar populations.

We are lucky that at present, the wild boar are found in discrete groups across the country, unlike parts of Europe where they are distributed in a more continuous fashion. To this end, we have recently been carrying out ASF contingency exercises to test our plans and resources. Hopefully, we won’t ever have to carry them out for real!